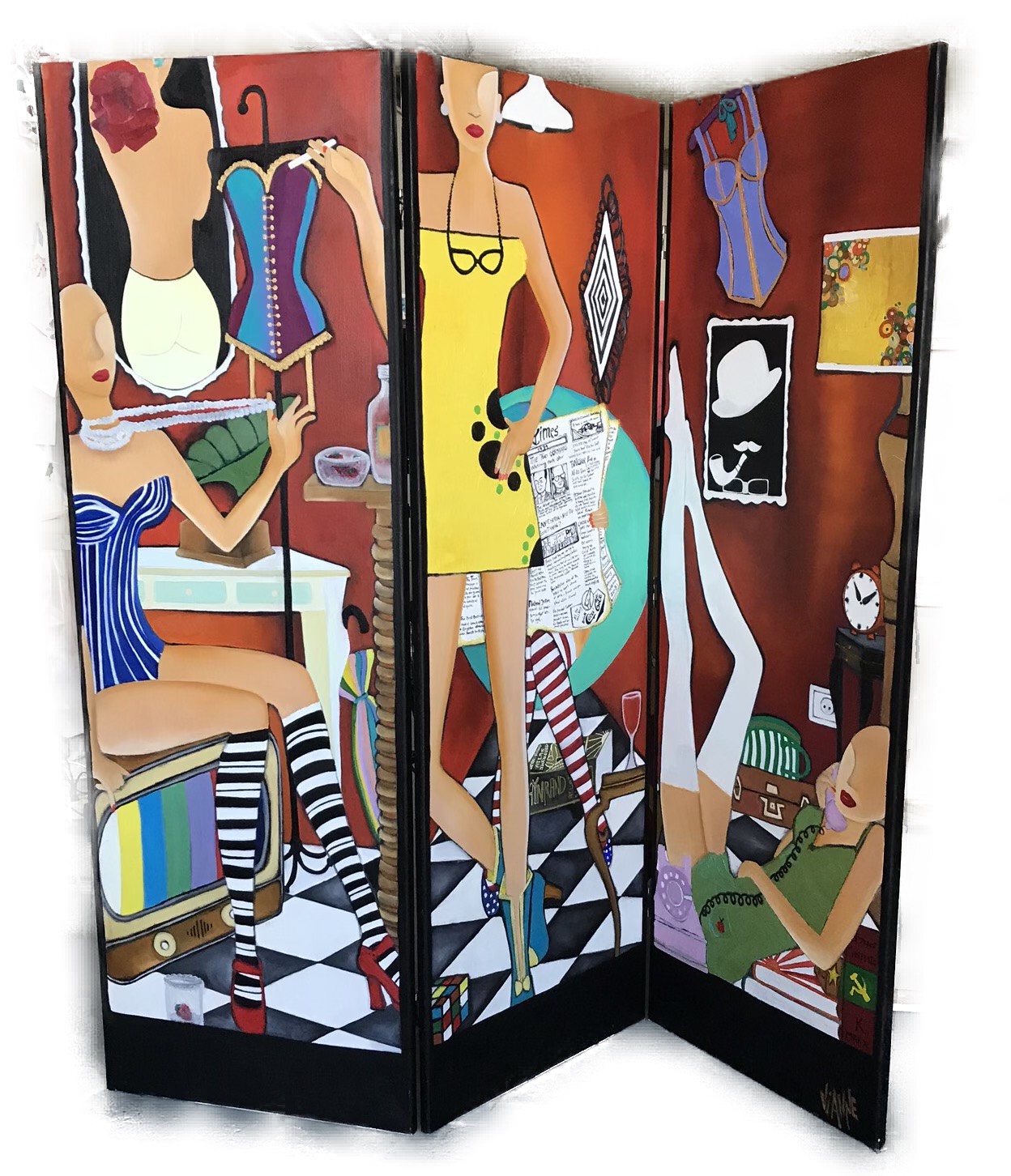 “Triptych 79” is one of my favorite works, mostly because of its geopolitical aspect. In a vintage red brothel 4 pleasure girls are killing time. The Times newspaper in the middle contains all the headlines of the turbulent year that 1979 was, a decisive year in the worlds politics. On the floor “Atlas Shrugged” of Ayn Rand, and “The Communist Manifesto” of K. Marx as well as the book of Mao. Back in the day in Iran people were arrested and tortured for owning these books ... and we had them in our library. The headlines of the newspaper are: - The two Germanies watching each other: the debate on the ongoing and the speculation of the creation of the one state Germany will be a part of the agenda. - Can carter’s move stop soviet war : People think they are uniting to defeat imperialism- Jimmy Carter’s meddling and that of his CFR handlers, may bring the radical Islamists to power, destroying the Paris of Mid-East - Iran - speculate some. - Rockefeller dies at 70, fell by heart attack at his desk - Friends and political allies stunned. - Vice President Saddam Hossein replaces president Hasan al-Barik and becomes president. Advertising : It has a way with women! - Romeo (current Alpha Romeo) - 100,000 flee, as worst storm ever hits the Gulf - Sahara desert experiences snow 30cm. - Tatcher foot in No. 10 door - The first female conservative to win the game / Scots go for Labor and turn back to Nationalists. - Afghan president is busted and executed in Kabul coup, reportedly with Soviet help - USRR invaded Afghanistan - Local rebels on march - Carter boycotts 1980 Olympic Games in Moscow ! - Oil nations buying up gold - Oil producing countries seeking new income - OPEC Crude Oil prices increased to under precedent level : 24$/B Advertising : it’s the real thing, Drink Coca Cola ! - Egypte and Israel begin sign the first peace treaty between the Arab nations and the Jewish state. - Micheal Jackson releases his break-through album “Off the Wall”. - The first British nudist beach opens in Brighton . - New sport: Snow board! - Sony introduces Walkman, 200$! - Can the wireless phone be of the future ? And Ironically the last headline reads: The Times newspaper is not published for nearly a year, due to an industrial dispute. - 2015